Different controversial topics in Soft Robotics, such as future and potential impact, real-world deployment, morphological computation vs. traditional control methods, etc., are frequent subject of debates. General community can benefit from making these debates more formal and publicly available. Debates are 80 minutes long with 4-6 participants and a moderator from recognized experts in the field. 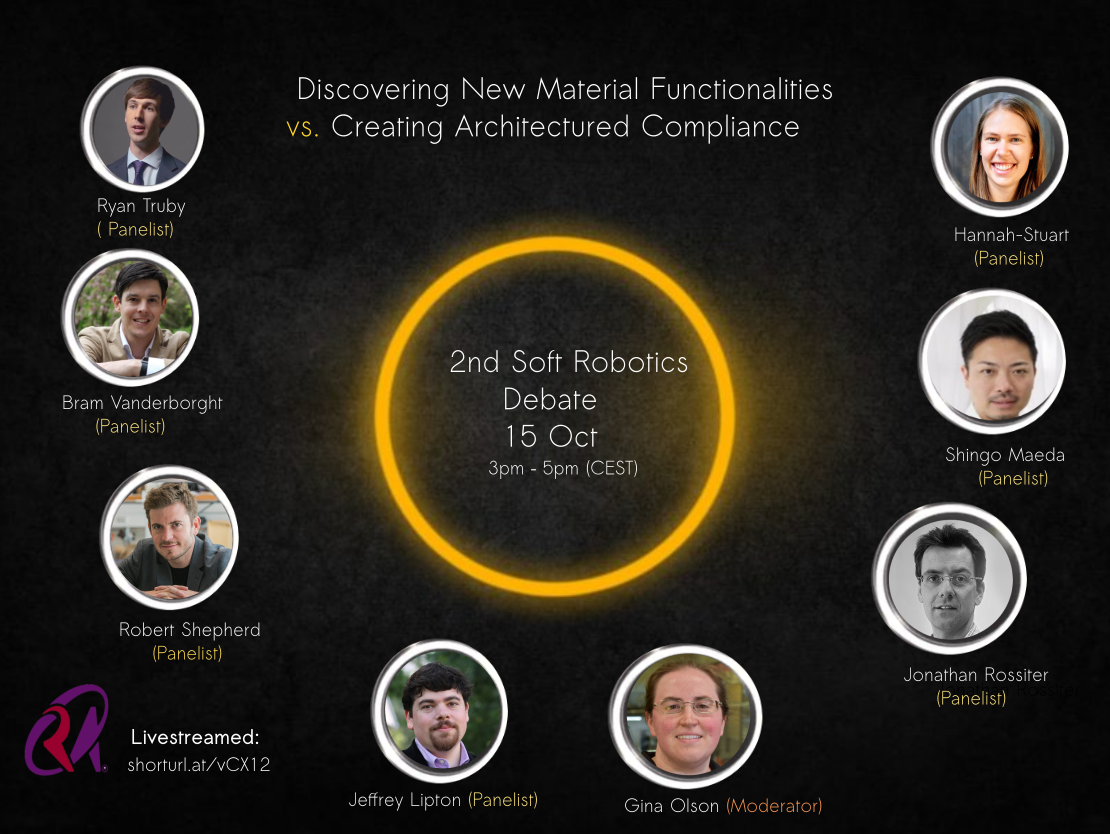 Where: IEEE Webex (no registration required)

Materials science research into compliant materials is well established, yet a gap still exists between cutting edge materials and implemented soft robots. In this debate, we will bring together experts in the fields of soft materials and soft robotics to discuss the necessary steps to bring more collaboration between these two fields. We will try to answer whether material development should focus on developing new functionalities for soft robots or on creating optimized materials to meet existing needs, allowing for easier rapid prototyping and technology transferability. 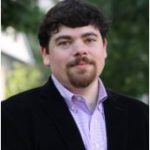 Dr. Jeffrey I. Lipton is an assistant professor at the University of Washington in the Mechanical Engineering Department with a courtesy appointment in the Paul G. Allan School of Computer Science and Engineering. He uses robotics to expand the set of programable material properties and uses programmable materials to enhance the capabilities of robots. He was previously a Post-Doctoral Associate at the MIT’s CSAIL in the Distributed Robotics Lab under Daniela Rus. He received his BS in Applied and Engineering Physics and PhD in Mechanical Engineering from Cornell. His Ph.D. work was under Hod Lipson in the Creative Machines Lab. His past work on 3D printed foods and 3D printing for the hospitality industry has influenced two of the largest 3D printing companies in America and garnered media attention from the New York Times, BBC, and others. He was the lead developer for the Fab@Home project which supported life science and food science researchers’ 3D printing needs on all six habitable continents.

Dr. Shingo Maeda is currently an associate professor at Shibaura Institute of Technology, Tokyo, Japan. He received in applied physics from Waseda University, Tokyo, Japan in 2008. He spent three years as an assistant professor at Waseda University. He moved to Shibaura Institute of Technology to found the Smart Materials Laboratory in 2011. He was a visiting professor at Scuola Superiore Sant’Anna (Prof. Cecilia Laschi) from 2015 to 2016. His current research topics include active matter, smart gels, soft actuators, chemo-mechanical system and ElectroHydroDynamics. 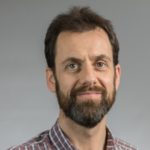 Prof. Jonathan Rossiter is a Professor of Robotics and head of the Soft Robotics group at Bristol Robotics Laboratory. In his robotic actuator and artificial muscle research he has been developing new polymer-composite actuators involving principles of buckling and bi-stability and robots which are inspired by bio-mimetic study of swimming organisms, including bacteria and fish. His research also include bio-mimetics, artificial intelligence, composites, sensors and the wider robotics field. Bio-mimetics is an engineering tool that covers a huge scale from the tangible nano-technology level, including materials, actuators and sensors, right up to the intangible level of artificial intelligence, including high-level perception, cognition and reasoning. 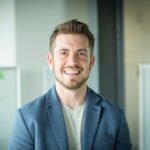 Prof. Robert Shepherd is the director of The Organic Robots Laboratory (ORL) at Cornell University that focuses on using organic chemistry of soft material composites for new capabilities in robots. He is focused on the material and mechanical design of soft machines. His work begins by identifying new material compositions for actuators, then mapping them onto a compatible mechanical system for motion. Due to the compliance of his soft material systems, the resulting machines are underactuated (e.g., they have more degrees of freedom than actuators) and much of their capabilities arise from this property. His interests lie in further developing the abilities of these soft machines. 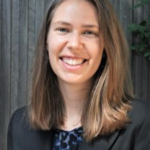 Dr. Hannah Stuart has been an Assistant Professor of Mechanical Engineering at the University of California Berkeley since January 2018, and is a faculty member of the Jacob’s Institute for Design Innovation. She received her BS in Mechanical Engineering from the George Washington University in 2011, then completed her MS and PhD in Mechanical Engineering from Stanford University in 2013 and 2017 respectively. Professor Stuart’s research interests include dexterous manipulation, robotics, bioinspired design and human haptics and she runs the Embodied Dexterity Group research lab (edg.berkeley.edu). She is a Hellman Faculty Fellow and recently received an Outstanding Service award from the IEEE Robotics and Automation Society. 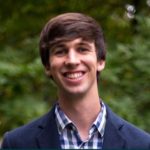 Dr. ‪Ryan L. Truby is a Postdoctoral Fellow at MIT’s Computer Science and Artificial Intelligence Lab working on the design, fabrication, and control of soft robots. He is currently developing new materials and manufacturing strategies for creating sensorized soft robots, as well as deep learning-based frameworks for their control. Before MIT, Ryan received his Ph.D. in Applied Physics from Harvard University, where he developed 3D printing strategies for fabricating novel soft robotic systems, such as the entirely soft, hardware-free Octobot he developed as part of a collaboration at Harvard’s Paulson School of Engineering and Applied Science and Wyss Institute. His research also includes work in 3D printed vascularized tissue constructs, soft electronics, artificial muscles, and architected materials. Ryan’s work at the materials-robotics interface has been supported by an NSF Graduate Research Fellowship and a Schmidt Science Fellowship, and he has received awards in both fields, including the Gold Award for Graduate Students from the Materials Research Society and the Outstanding Paper Award at the 2019 IEEE International Conference of Soft Robotics. Ryan is an Adjunct Assistant Professor of Materials Science and Engineering and Mechanical Engineering at Northwestern University, where he will begin as a tenure-track Assistant Professor and Core Member of Northwestern’s Center for Robotics and Biosystems next year. 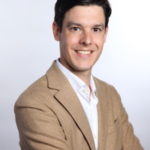 Prof. Bram Vanderborght is a professor at the VUB since 2009. Currently he coordinates EU FET SHERO SHERO project and Marie Curie ITN SMART project, he is VUB-PI of EU project SOPHIA, and he is the core lab manager of Flanders Make in Flexible Assembly and member of Brubotics . He is also the Editor In Chief of IEEE Robotics and Automation Magazine. His research interests include the use of soft and self healing actuators for cognitive and physical human robot interaction in applications in health and manufacturing. Our work is on display in the AI Experience Center . 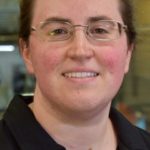 Dr. Gina Olson earned her PhD in Robotics and Mechanical Engineering from Oregon State University, where she was advised by Dr. Yiğit Mengüç and Dr. Julie A. Adams. Her dissertation work focused on developing modeling techniques to aid in soft robot arm design. She is currently a postdoctoral researcher in the Soft Machines Lab at Carnegie Mellon University, where she is developing soft joints for deep sea diving suits, in order to maintain diver mobility. Her current research interests are developing novel soft robot structures, modeling the mechanics of soft robots and investigating soft-appropriate alternatives to traditional methods in path planning, control, sensing, etc. in order to build functional soft robots. Prior to coming to Oregon State, Dr. Olson worked as a Technical Lead Engineer at Meggitt Polymers and Composites, where she developed and qualified fire seals for aircraft engines. She earned her Master’s in Aeronautical Engineering at Caltech, and her Bachelor’s in Mechanical Engineering at Rose-Hulman Institute of Technology.

”Morphological Contribution vs. Traditional Methods for Control and Planning in Soft Robotics” 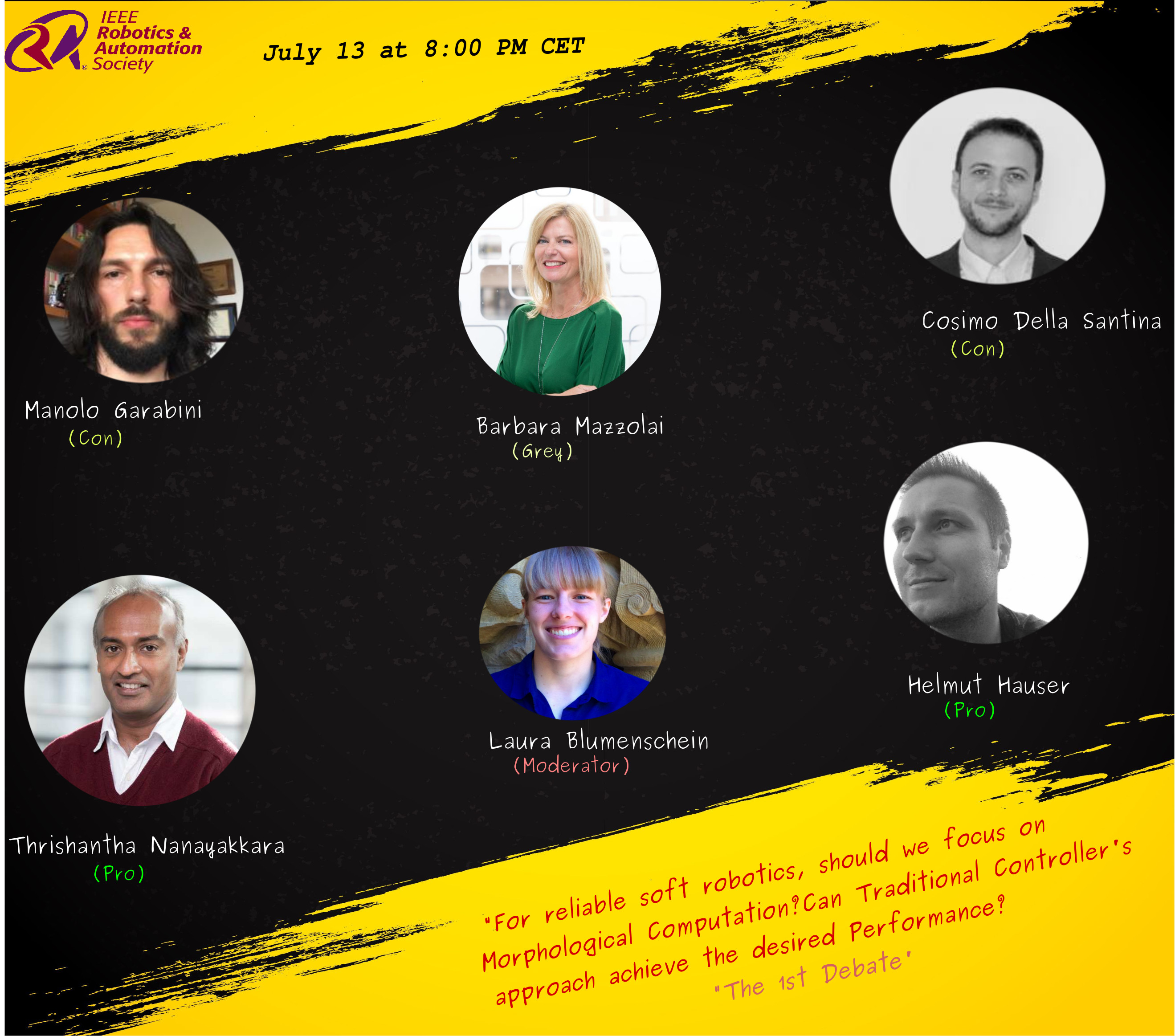 Where: IEEE Webex (no registration required)

Suggest us questions that you think may spark good debate around this topic: IEEE SmatSheet From 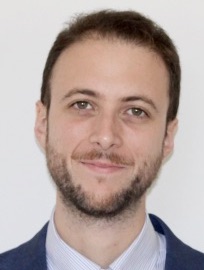 Dr. Cosimo Della Santina is currently Assistant Professor at CoR, TU Delft. He received a PhD in robotics (cum laude, 2019), from University of Pisa, Italy. He was a Visiting PhD student and a postdoc (2017 to 2019) of the Computer Science and Artificial Intelligence Laboratory (CSAIL), Massachusetts Institute of Technology (MIT), Cambridge, MA, USA. From 2020, he is affiliated to the German Aerospace Centre (DLR) as external research scientist. For the first six months of the same year he also held a post doc position at the department of Mathematics and Informatics, Technical University of Munich (TUM), Germany. Cosimo has been awarded with EuRobotics Georges Giralt Ph.D. Award (2020), and the “Fabrizio Flacco” Young Author Award of the RAS Italian chapter (2019). He also has been a finalist of the European Embedded Control Institute PhD award (2019). His main research interests include (i) Modelling for Control and Model Based Control of Soft Robots, (ii) Combining Machine Learning and Model Based Strategies with application to soft robotics, (iii) Soft Robotic Hands. 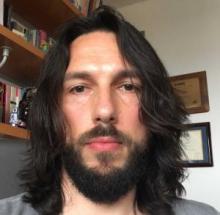 Dr. Manolo Garabini graduated in Mechanical Engineering and received the Ph.D. degree in Robotics from the University of Pisa where he is employed as Assistant Professor. His main research interests are in the design, planning and control of soft and adaptive robots, from single joints, to end-effectors (hands, grippers, feet), to complex multi-dof systems. A part of his activity has been devoted to theoretically demonstrate the effectiveness of soft and adaptive robots in high performance, high efficiency and resilient tasks via analytical and numerical optimization tools. He contributed to the realization of modular Variable Stiffness Actuators. He contributed in the design of the joints and the lower body of the humanoid robot WALK-MAN and participated at the DARPA Robotics Challenge and at a field test in Amatrice, Italy after a disastrous earthquake event. Recently he contributed to the development of an efficient and effective compliance planning algorithms for interaction under uncertainties. Currently he is the Principal Investigator in the THING H2020 EU Research Project for the University of Pisa.

Dr. Helmut Hauser is a Senior Lecturer (Associate Professor) in Robotics at the University of Bristol and the Bristol Robotics Laboratory. His research is focused on morphological computation and embodiment, especially in the context of soft robotics. He is interested in understanding the underlying principles of how complex physical properties of biological systems are exploited to facilitate learning and controlling tasks, and how these principles can be employed to design better robots. He has published his work in high-impact journals including Science Robotics, Nature Machine Intelligence, and Scientific Reports and he has won various awards at international conferences. He was the project manager of the EU project LOCOMORPH and he participated in a number of other projects like OCTOPUS, SMART-E and NCCR Robotics. He was co-organizer of the 2nd and 3rd international conference on morphological computation and he organized a number of workshops and special issues on the same topic. He is the editor of the e-book “Opinions and Outlooks on Morphological Computation”. He is currently leading the Leverhulme Trust Project “Computing with Spiders’ Webs” and the UKRI Strategic Research Group on Soft Robotics.

Dr. Barbara Mazzolai is Director of the Center for Micro-BioRobotics since February 16th, 2011, and she was Deputy Director for the Supervision and Organization of the IIT Centers Network from July 2012 to 2017. She has been member of panels of the European Commission within the Seventh Frame Program in the field of Robotics and ICT, and of the Portuguese Foundation for Science and Technology in the field of Environment and Health. She is member of the Editorial Board of Bioinspiration & Biomimetics, Soft Robotics, Biomimetics, Robotics & Automation Letters, and Associated Editor for Frontiers in Bionics and Biomimetics. Her current scientific activity focuses on bioinspired soft robotics, with a particular research interest in merging Biology and Engineering. She is author of more than 180 papers appeared in international journals, books, and conference proceedings. 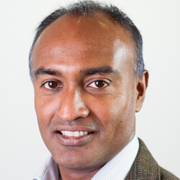 Dr. Thrishantha Nanayakkara is a Reader (associate professor) in Design Engineering and Robotics at Dyson School of Design Engineering (DSDE), Imperial College London , where he is also the Director of the Morph Lab. He has published more than 140 papers in flagship robotics conferences and journals including IEEE transactions on robotics, IEEE Robotics and Automation Letters, RSS, IROS, ICRA, and RoboSoft. TN is in the the UK RAS Strategic Task Group for Soft Robotics, and in the editorial board as an Associate Editor of flagship robotics publications such as IEEE Robotics and Automation Letters (RAL), RSS, ICRA, IROS, RoboSoft, Frontiers in Soft Robotics, and the Journal of Robotics and Mechatronics. He has worked at leading laboratories for robotics and neuromotor control, including the Laboratory for Computational Motor Control, Johns Hopkins University, MIT Computer Science and Artificial Intelligence Lab (CSAIL), and Harvard Neuromotor Control Lab. 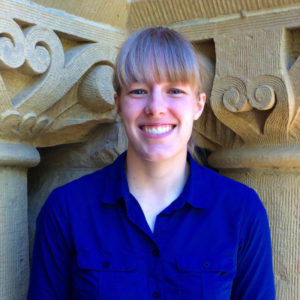